Marian Jean Powers was born August 14, 1926 in Red Wing, Minnesota, the daughter of Forrest and Christina (Stopperan) Powers. She moved with her parents to Waterloo, IA at the age of two. Active in church and school music programs, Marian graduated from West High School in 1943. Following graduation, she worked at the Waterloo Savings Bank.

On June 14, 1947, Marian was united in marriage to Dale W. Fink. They made their home in Grundy Center, where she worked at the Grundy National Bank until the birth of their first child, James Dale, in 1950. A daughter, LuAnn Kay, was born in 1953. While raising her family, Marian was a homemaker and active volunteer. Later, she worked part-time in the Grundy County Assessors Office, for the Selective Service System, and at the Grundy County Hospital. In 1981, Mr. and Mrs. Fink retired and moved to the Macon, Missouri area. In 2006, Marian returned to northeast Iowa, moving into the Western Home Communities in Cedar Falls.

Throughout her life, Marian was active in church and community activities. She served as organist at the American Lutheran Church in Grundy Center for 34 years, and at Zion Lutheran Church in Macon, Missouri for 20 years. A highlight of her years in Macon was performing with the ladies' chorus, Women of Note. In addition to her love of music, Marian enjoyed spending time with family and friends, reading, and traveling.

Marian was preceded in death by her parents and by her husband, Dale in January 2000. 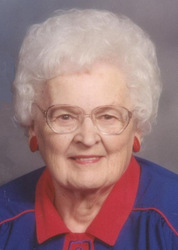