Louise L. DeVries, 93, of Grundy Center, formerly of Holland, passed away on Tuesday, August 3rd, 2010 at the Grundy County Memorial Hospital Acute Care Center in Grundy Center while under the care of the Cedar Valley Hospice. Funeral services will be held on Saturday, August 14th, 2010, 10:30 A.M. at St. Pauls Lutheran Church in rural Wellsburg with Pastor Gary Burkhalter officiating. Burial will follow funeral services at St. Pauls Lutheran Church cemetery. A visitation will be held on Friday, August 13th from 4 to 7 P.M. at Doyen-Abels Funeral Home in Wellsburg.

Louise was born on March 7, 1917 in Titonka, Iowa, the daughter of John and Minnie (Senne) Harringa. She attended country school in Titonka, graduating from the 8th grade. As a child, Louise attended church and was confirmed at the Immanuel Lutheran Church in Titonka.

She worked as a hired girl from age 13 until 25, when she later met and married Ralph DeVries on January 6, 1943 at the Immanuel Lutheran Church in Titonka. They were married for 58 years. The couple made their home on a farm in rural Holland for over 40 years. Louise and Ralph welcomed two children, Ruth and Robert.

She was preceded in death by her parents; husband Ralph; daughter Ruth Knock; a sister Martha Schwarz and brothers John and Dick Harringa. 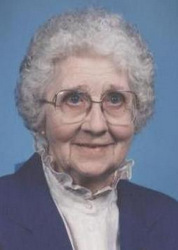