Angie Marie Howe, 36, of Dike, passed away on Friday, July 30, 2010, at her home in Dike, Iowa. Funeral Services will be held at 10:30 A.M. Monday, August 2, 2010, at Christ Lutheran Church, Waterloo, Iowa with Rev. Michael Knox officiating. Visitation will be held on Sunday, August 1, 2010, from 4 to 7 P.M. at Engelkes-Abels Funeral Home in Dike. Memorials may be made to Black Hawk County Humane Society or Christ Lutheran Church both in Waterloo.

Angie was born on December 13, 1973, in Waterloo, Iowa, the daughter of George and Grace (Goetz) Howe. Angie grew up in Dike and attended school there, graduating from Dike New Hartford High School. She later attended Hawkeye Community College receiving her two year Associates degree. She had also attended U.N.I working on her four year degree. She worked many jobs while attending college; she presently was working as a clerk at the Sinclair station in Cedar Falls, Iowa.

Angie was known for being good with people and talking and discussing their future and their goals in life. She was always there to lend a helping hand for whoever needed one. She also enjoyed the outdoors, exercising, astronomy, psychology, music, baking and animals, mostly her pet cats, Sassy, Missy and Bear. 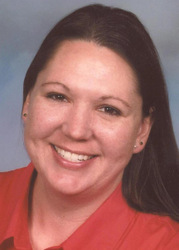