Henry Dusty Rhoads, 89, of Kansas City, MO, formerly of Grundy Center, Iowa, went to be with our Lord on June 18, 2010. Memorial services will be at 10:30 am Tuesday, June 22, 2010, at the Bethany Presbyterian Church in Grundy Center with Pastor Tom Bower officiating. Burial will follow at Rose Hill Cemetery in Grundy Center. A memorial fund has been established.

Henry "Dusty" Rhoads was born on January 6, 1921, to Charles Rhoads Sr. and Jenny (Loof) Rhoads in Wellsburg, IA. He attended school in Grundy Center. Dusty worked as an auto mechanic at Graham Motor Company in Grundy Center, Ted Geerdes Garage and Dike Oil Company in Dike, IA and the Shell Oil Station in Grundy Center before moving to Kansas City, MO in 1980. There he was employed at Co-op and Farmland Industries before retiring in 1988. Dusty served in World War II from July 6, 1942 to September 6, 1945 in the Army Air Force. He was honorably discharged with the rank of Staff Sergeant.

Dusty married June Eilers on May 6, 1946 at the Little Brown Church in the Vale in Nashua, IA. They were blessed with one daughter, Linda Sue.

His greatest joy in life was being 'Papa' to his grandchildren and great-grandchildren with whom he interacted every day. His passing has left a tremendous hole in our hearts that is only filled by the knowledge that he has found ultimate peace and joy in Heaven. He will be missed by his family and friends more than words can say.

He is survived by his daughter Linda and her husband Rodney Flater; three grandchildren, Tammy Box, Angie (Steve) Conway and Amy Holtwick; four great-grandchildren, Austin and Megan Conway, and Ryan and Tyler Flater, all of Kansas City, MO. He is also survived by one sister, Carrie Mackie, one brother, Richard Rhoads, four sisters-in-law and many nieces and nephews.

He was preceded in death by his parents, June, his wife of 52-1/2 years and six brothers, John, Charles Jr., Bill, Kenneth, Carl and Donald. 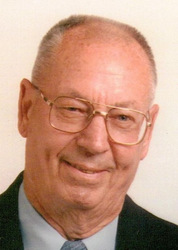