Alvin Frederick Hamilton, 89, of Grundy Center, Iowa, died peacefully, surrounded by family, on June 14, 2010 at Allen Memorial Hospital in Waterloo. Visitation will be held at Engelkes-Abels Funeral Home in Grundy Center from 5 pm to 7 pm on Friday, June 18 with prayer services and sharing time beginning at 5pm and a rosary at 7 pm. Mass of Christian Burial will be held at 10 am on Saturday, June 19, at Holy Family Parish, St. Gabriels Catholic Church, 21275 U Avenue, Reinbeck, Iowa (about 4 miles south of Dike). Burial will be at 1 pm, following lunch, at Maple Hill Cemetery, north of Gladbrook, with military honors provided by Grundy Center Post #349 of the American Legion, and Grundy Center AMVETS #17 and Lincoln AMVETS Post #10. Memorials may be made to the Waterloo Cedar Falls Celiac Support Group or St. Gabriels Catholic Church.

Alvin was born August 16, 1920, on a farm near Hutton Valley, in southern Missouri, son of Claude T. and Rosa L. (Boss) Hamilton. His family moved to Lincoln, Iowa, in 1928. He was a 1938 graduate of Reinbeck Consolidated High School and served with the Army in Japan following WWII. Alvin had a 35 year career with Lincoln Coop and served as the manager for 25 years. Alvin married June Marion Schulz of rural Tama County on July 24, 1947, at Sacred Heart Catholic Church in Grundy Center. They lived for many years in Lincoln, Iowa before retiring to Grundy Center in 1985.

Alvin was a passionate family man, a good businessman, a great friend and a community-minded volunteer. He loved travel, camping, fishing, playing cards, and dancing, spending many winters in Alamo, Texas. He was a long time member and president of the Lincoln School Board, a charter member and president of Lincoln AMVETS Post #10, a member of Grundy Center AMVETS Post #17, and for many years served on the Lincoln Town Council and as the Lincoln City Clerk.

Alvin was preceded in death by his parents, three siblings, Glenn, Robert, and Lois, and brother-in-law Bill Wolfe. 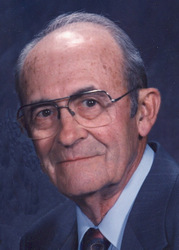