Helen Marie Heerts was born December 15, 1921, in Grundy County, Iowa, the daughter of Albert and Henrietta (Abels) Franken. She attended rural school in Grundy County. Helen was united in married to Harry E. Andreessen in October 1940 at Colfax Center Presbyterian Church rural Holland and to this union four children were born. They later divorced. Helen was united in marriage to Ralph Heerts on June 5, 1970 at First Presbyterian Church in Grundy Center, Iowa. Helen lived in Grundy County all her life. She was a member of the Colfax Center Presbyterian Church for many years and was active on the Colfax Presbyterian Women's Group. Helen worked for 30 years at Grundy County Memorial Hospital as a CNA and therapy assistant. After retiring Helen loved to read and volunteer at Senior Citizen Center and was active in putting together programs at the Grundy Care Center in Grundy Center. Most of all she loved playing cards and spending quality time with her family and friends.

Preceeded in death by her parents; her husbands, Harry and Ralph. 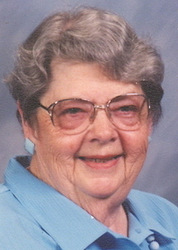