Elwood K. Red Doyen, 78 of Wellsburg, Iowa, died on Friday, March 26, 2010 at the Grundy County Memorial Hospital Long Term Care Unit in Grundy Center, Iowa. Funeral services will be at 10:30 am on Tuesday, March 30 at St. Pauls Lutheran Church near Wellsburg with Pastor Gary Burkhalter officiating. Burial will follow in the church cemetery with military honors provided by Wellsburg AMVETS Post #91 and American Legion Post # 213. Visitation is from 5 pm to 8 pm on Monday evening at Doyen-Abels Funeral Home in Wellsburg.

Red was born July 29, 1931 son of John Sr. and Grace (Shugar) Doyen, at his parents home in Wellsburg, IA. He graduated from Wellsburg High School in1949 and on April 6, 1951 was united in marriage to Donna Etjen at his parents home. Red served with the U.S. Army in Korea from 1952 to 1954 attaining the rank of Sergeant and was awarded the Bronze Star. Donna passed away on November 29, 1974 and Red was then united in marriage to Vaneda Freese Huisman on October 30, 1981 at St. Pauls Lutheran Church.

He lived his entire life in Wellsburg where he was part owner of his familys furniture and appliance business (Doyen Furniture and Appliance). There he was a carpet and linoleum installer for 35 years. He also helped with the family funeral business (Doyen Funeral Home). After the sale of the store and funeral businesses he worked as the Wellsburg City Clerk from 1988-1994. He also operated a tax and bookkeeping business until his retirement.

He was a member of Wellsburg AMVETS post #91, American Legion Post #213, St. Pauls Lutheran Church and the Wellsburg Community Club were he held various offices in most of these organizations. He was an avid fisherman, hunter and enjoyed golfing, watching sports, and attending his grandchildrens ball games. He played on the 30 Plus softball team for many years. Red also enjoyed traveling on many bus trips with his wife, Vaneda.

He was preceded in death by his parents; his first wife, Donna; brother, John Jr.; sister, Florence Lindaman; and son-in-law, Ralph Haupt. 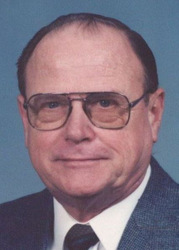