Helen was born January 28, 1913, in Reinbeck, Iowa, the daughter of George and Dala (Stephen) Maehrlein. She grew up in Reinbeck and graduated from the Reinbeck High School. She married Wellwyn W. Poland on May 4, 1935, in Grundy Center, Iowa. She spent most of her married life as a house wife, but later purchased the local café and named it Poland Café in Reinbeck. Helen also sold Amway products, knitted afghans, crocheted many doilies, loved to cook and bake especially make pies in her spare time. Helen was long time member of the Union United Church of Christ in Reinbeck and also enjoyed attending services at Salem Church of Lincoln in Lincoln, Iowa. She was a member of the Rebeccah Lodge, American Legion Auxiliary and Royal Neighbors. She was very devoted to her children and grandchildren and loved to play bingo, play penny slots and winter in Arizona. She will be dearly missed by all who knew her and especially by her family.

She is preceded in death by her parents; her husband Wellwyn; son, Gary Poland and his wife Greta; sister, Ida and brother, George II. 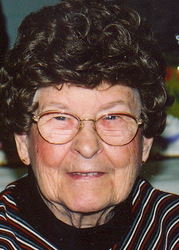