Jerry Lee DeVries, 68, of Reinbeck passed away on Saturday, January 23, 2010, at his home in Reinbeck while under the care of Cedar Valley Hospice. Funeral services will be 10:30 A.M., Thursday, January 28, 2010, at the Union Congregational United Church of Christ in Reinbeck, Iowa, with Pastor Joel Love officiating. Burial will follow at the Reinbeck Cemetery in Reinbeck. Visitation will be Wednesday, January 27, 2010, from 4:00 P.M. to 8:00 P.M., at French Hand Funeral Home in Reinbeck, with the family present to greet friends.

Jerry Lee DeVries was born September 19, 1941, in rural Butler County, Iowa, the son of Benjamin and Alice (Abbas) DeVries. He attended school and then graduated from Parkersburg High School in 1959. On April 14, 1962, Jerry was united in marriage to Elizabeth (Sally) Miller at the American Lutheran Church in Grundy Center, Iowa. The couple resided in Grundy Center, Gladbrook area and then moved to Reinbeck in 1972. Sally died February 28, 1998. On February 17, 2007 at the United Church of Christ in Reinbeck, Jerry married Carolyn Bowman they made their home in Reinbeck. Jerry worked for Manatts Concrete in Grundy Center for 22 years retiring in July 2009 as the plant manager. He was along time member of the United Church of Christ in Reinbeck. He enjoyed working in his garden, but most of all he loved spend time with his family and friends.

Preceding him in death were his parents; his wife Sally; son, Gary on April 28, 2008; infant brother, Gary Lee DeVries. 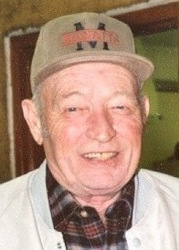