Bertha J. Diamond, 81, of Eldora, died from natural causes on Friday, October 23, 2009 at Valley View Nursing and Rehab Center in Eldora. Following cremation memorial services will be held at 10:30 am on Tuesday, October 27 at Creps-Abels Funeral Home in Eldora with Chaplain James Key officiating. Burial will follow in the memorial addition of the Eldora City Cemetery. Berthas family will gather to greet friends at the funeral home from 5 pm to 7 pm on Monday evening.

Bertha was born September 2, 1928 in Grundy Center, Iowa, daughter of Fred and Pearl (Ash) Aswegan and graduated from Grundy Center High School. On August 24, 1947 Bertha was united in marriage to Ray J. Diamond in Marshalltown, Iowa. Ray and Bertha lived for some time in Marshalltown and Des Moines but spent most of their married lives in Eldora. She attended Marshalltown Community College later in life, becoming certified as a medical assistant, and then she worked as a CMA for Valley Veiw Nursing Home then the Hardin County Care Facility retiring in 1992. She was a former member of the Eastern Star and the Red Hat Society, and she enjoyed reading, bowling, and overwintering in Port Aransas, Texas where she collected sea shells.

Surviving is her daughter, Gail Van Lengen of Alden, Iowa and her husband, Roger; sons, Craig Diamond of Eldora, and Tony Diamond of Chicago, Illinois and his wife Kristine; sisters, Frieda (Bob) McBride of Conrad; brother, Fred Jr. (Carrie) of Rolla, Missouri; and by five grandchildren and five great grandchildren.

She was preceded in death by her husband, Ray on March 13, 2007; by her parents; and brothers, Harold, Raymond, and Earl Aswegan. 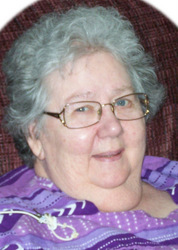