Adeline was born May 25, 1922, in Auburn, Iowa, the daughter of Clarence and Marie (Christensen) Ishman. She was raised in the West Union area and attended school there. On April 5, 1942 Adeline married Thomas Kerr in West Union, Iowa. To this union three children were born Peggy, Patsy and Thomas. They made West Union their home until 1950 when they moved to Evansdale, Iowa. They moved to Raymond, Iowa in 1972 where Adeline resided at the time of death. Adeline enjoyed having family lunches at Bonanza. But most of all she enjoyed spending time with her family and friends.

She was preceded in death by her parents, husband- Thomas and daughter- Peggy Freese, one brother and one sister. 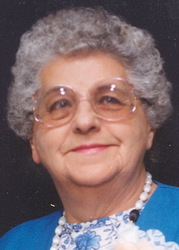