Pauline Grace Farris, 81, of Grundy Center, Iowa, died Sunday August 9, 2009, at the Grundy County Memorial Hospital in Grundy Center. Funeral services will be 10:30 A.M., Friday, August 14, 2009, at the United Methodist Church in Reinbeck, Iowa, with Pastor Terry Plocher officiating. Burial will follow at the Reinbeck Cemetery in Reinbeck. Visitation will be Thursday, August 13, 2009, from 6:30 P.M. to 8:30 P.M., with the family present to greet friends, at French Hand Funeral Home in Reinbeck. A memorial fund has been established.

Pauline was born October 13, 1927, in Keokuk, Iowa, the daughter of Harold and Grace (Martin) Waddill. She was raised in the Bowen, IL, area and attended country school and high school there. Pauline then attended college at Western University in Macomb, IL, then known as Western State Teachers College. Pauline then taught grade school (all eight grades) in country schools for 2 years. She later took a office position with Quincy Paper Company in Quincy, IL. While taking square dance lessons at the YMCA, she met Thomas Farris, and they were married on June 24, 1950 in Quincy, IL. Tom and Pauline had four children, Steven (deceased), Cindy, Mary and Angie. Pauline and Tom moved to Iowa in 1955, and lived in Grundy Center, Eldora, Reinbeck and Waterloo. Pauline worked in the cafeteria at Parkview Manor Nursing Home, Grundy County Memorial Hospital and 27 years at Covenant Hospital. Pauline enjoyed watching plays and all kinds of music. She liked attending her grandchildren's many events and activities. She liked to entertain and play cards and any other types of games. But most of all she enjoyed spending time with her family and friends. Pauline was a very giving person and always gave to others and thought of others before herself. She joined the United Methodist Church in Reinbeck in 1957 and has been an active member since. Pauline volunteered at church and Covenant Hospital Gift Shop.

She is survived by her daughters-Cindy Gerhard and her husband Steve of Grundy Center, Iowa; Mary Vaughan and her husband Gordon of Cedar Falls, Iowa; Angie Bishop and her husband Mark of Des Moines, Iowa: 11 grandchildren;3 great grandchild; brother -Donald (Mary) Waddill; sister- Dorothy Aden and several nieces and nephews.

She was preceded in death by her parents, husband- Thomas and son- Steven. 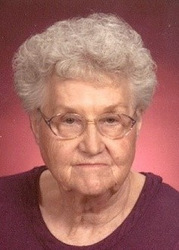