Gladys was born October 4, 1918 on a farm near Hubbard, Iowa, the daughter of Frederick W. and Anna Wilamina Roll Herzog. She attended school in the Hubbard school district.

On November 17, 1945 she married Peter Theodore (Ted) Meinert who died January 13, 2004. The couple farmed southeast of Grundy Center. She worked for the Grundy Center Community Schools for several years as a cook. Gladys loved to bake bread, rolls and cakes, which family and friends enjoyed. She always has a smile for you.

She was preceded in death by her parents, a sister Eleanor Russell; four brothers: Paul, Elmer, Herbert and Frederick Herzog. 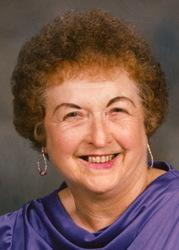