Leisa Ann Sanders, 57, of Mound City, Kansas, formerly of Reinbeck, Iowa, died Sunday, May 31, 2009, at University Hospitals and Clinics in Iowa City, Iowa. Per Leisa's wishes she was cremated. A private family memorial service is being planned. Memorials may be made to the Leukemia Foundation or ASPCA in Leisa's name.

Leisa was born April 11, 1952, in Waterloo, the daughter of James and Marilyn (Karkosh) Gill. Leisa attended school in Reinbeck graduating from Reinbeck High School in 1970. During her high school years she won many state and national honors for her baton twirling. Leisa attended Parsons College in Fairfield, Iowa, where she was a lead baton twirler with the Parsons Bears Marching Band. After the college dropped their football program she transferred to Northwest Missouri State, where she also was the lead baton twirler for their marching band.

On August 11, 1974, Leisa married Ron Sanders of Kansas City at The United Church of Christ in Reinbeck. They lived in the Kansas City Kansas area. Leisa and Ron later divorced. Leisa continued to live in Kansas City. She loved living in the country and riding Harley Davidsons. She liked to crochet and knit Afghans and give them to family members. She loved spending time with her dog Kodi.

Preceded in death by her father, James Gill; grandparents, James and Minerva Karkosh and Frank and Mayme Gill. 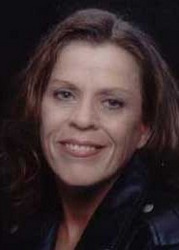