Helen M. Collins was born on July 27, 1914 in rural Conrad, Iowa, to Howard and Gertrude (Benham) Upton. She attended school in Conrad. In High School she was in the orchestra as first chair violinist, graduating in 1931.

On May 10, 1933 she was united in marriage to W. Melvie Collins in El Monte, California. Upon returning to Iowa they farmed the family farm in rural Conrad. In 1938 they moved to Palermo Township and farmed there until retiring in 1971. The moved to Grundy Center and then to West Plains, Missouri and then returned to Grundy Center. She moved to Arlington Place following the death of her husband on September 12, 2001 and remained there until two weeks ago before her death.

She was a beautiful seamstress making many clothes, wedding dresses and specializing in quilts. While at Arlington place she was still busy on the sewing machine where she and a fiend make Hospice quilt tops - she once said they had made over 200. You could find her listening to books on tape as she had been an avid reader before her eyesight deteriorated. She was a member of the United Methodist Church, the Palermo Township and Grundy Center Woman's and S.K. Clubs. She enjoyed visits from family and friends and was a wonderful cook, entertaining family nearly every weekend when she was able. She loved entertaining people with her ukelin until Arthritis took its toll on her hands.

She was preceded in death by her husband: W. Melvie; a daughter and son-in-law: Dorothy and Charles Maxwell; her parents, a sister: Artis Wical; and three brothers: Ben, Frank, and Keith Upton. 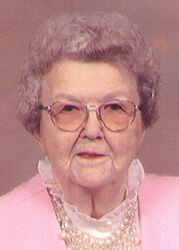