Merle was born October 31, 1924 the son of M.G. and Reka (Barkhoff) Mamminga in Grundy Center, Iowa. He graduated from Grundy Center High School in 1943, where participated in music activities.

Merle retired after 44 years in the grocery business, mostly working at the Grundy Food Market which was owned by his brother, Frank. He was a member of First Presbyterian Church, where he sang in the church choir. Merle sang for many funerals in the Grundy Center area during his singing career.

Merle is survived by one sister-in-law, Esther Mamminga of Grundy Center.

He was preceded in death by his parents, wives, and three brothers, Arthur, Russell and Frank. 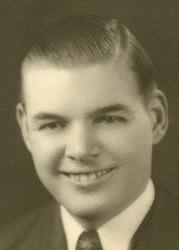