Donald J. Siefken, 89, of Wellsburg, died from natural causes on Wednesday, March 11, 2009 at the Heritage Care Center in Iowa Falls. Funeral services will be at 2:30 pm on Saturday, March 14 at St. Pauls Lutheran Church in Rural Wellsburg, Iowa. Visitation is from 5 pm  7 pm on Friday at Doyen-Abels Funeral Home in Wellsburg. Memorials may be directed to Donalds family.

On November 24, 1946 he was united in marriage to Lorraine P. Harringa at Immanuel Lutheran Church in Titonka, Iowa. They made their home in Wellsburg and to this union were born children, David, Marcene, and Darlene. Donald worked on a section crew for the Rock Island Railroad for 36 years. He enjoyed woodworking, gardening, and fishing and was a member of St. Pauls Lutheran Church where he served on several boards.

He is survived by his wife, Lorraine who resides at the Heritage Care Center in Iowa Falls; son, David and his wife Phyllis of Cedar Falls; daughters, Darlene and her husband Dan Merklin of Iowa Falls, and Marcene and her husband Mark Hensel of Monticello, Wisconsin; sister; Marion Koch of Grundy Center; grandchildren, Jason (Susan) Siefken, Emily (Bradley) Conn, Lindsey Hensel, and Allison Hensel; and great-grandchildren, Abby and Cooper.

He was preceded in death by his parents and brothers, Edward and Roland. 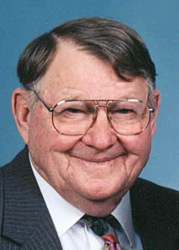