Gertie Bunger, 90, of Wellsburg, Iowa, died Friday, November 30, 2007, at the Presbyterian Village in Ackley, Iowa, while under the care of North Iowa Hospice. Funeral services will be 1:30 P.M., Tuesday, December 4, 2007, at the United Reformed Church in Wellsburg, with Pastor Harold Miller officiating. Burial will follow at Shiloh Cemetery in Wellsburg. Visitation will be Monday, December 3, 2007, from 5:00 P.M. to 7:00 P.M., at Doyen-Abels Funeral Home in Wellsburg. Visitation will also be Tuesday morning at the funeral home from 9:00 A.M. to 11:00 A.M. The family will be present on Monday evening to greet friends. Memorials may be directed to the United Reformed Church in Wellsburg.

Gertie was born March 27, 1917, on the home farm in rural Grundy County, Iowa, the daughter of Dick and Tatjie (Ross) Huisman. Gertie attended German Township rural country school. On October 24, 1945, Gertie was united in marriage to Tielko H. Bunger by Rev. Hanscom at the Little Brown Church in Nashua, Iowa. Gertie was a homemaker and also sold Stanley Home Products for eighteen years. Gertie's husband Tielko died on July 29, 1995, and she continued to make Wellsburg her home.

Gertie was a faithful member of the United Reformed Church in Wellsburg, where she had been a member of the Helping Hands Group for over thirty years and then she became a member of the Willing Workers. She loved to sew and do cross-stitch.

She was preceded in death by her parents; her husband Tielko; five brothers: Bill, Jerry, Henry, Dick and Albert Huisman. 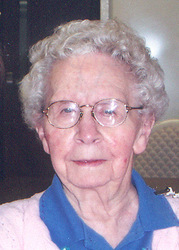