Vel was born September 13, 1929, in Wadena, Minnesota, the daughter of Martin and Gladyce (Bickford) Grismer. Vel graduated from Paynesville High School and received her Bachelors Degree from St. Cloud State University in 1951.

On June 18, 1955, she was united in marriage to Kenneth Wright in Paynesville, Minnesota. The couple has resided in Marion, Iowa; Tucson, Arizona; and Grundy Center.

She attended UNI where she acquired her Learning Disabilities training. She served as a Resource Room teacher at Grundy Center High School for 19 years, retiring in May 1991. Vel was a dedicated volunteer. She served on the Grundy Center Library Board. She also worked as a volunteer for Allen Hospital in Waterloo and Grundy Country Memorial Hospital for many years. She was an active member of the Grundy Center United Methodist Church for 38 years.

She is survived by her husband Kenneth; a daughter, Vanessa, and her husband Pastor Charles Koester of Boscobel, Wisconsin; a son, Paul, and his wife Kimberly of Pinecrest, Florida; 3 grandchildren: Olivia Koester, and Hailey and Kenny Wright; a sister, Rita Wolford, and her husband Charles of Minneapolis, Minnesota.

She was preceded in death by her parents; a brother, Lawrence Grismer; and a sister, Wanda Harper.

In lieu of flowers, memorials may be directed to Cedar Valley Hospice or University of Iowa Cancer Research. 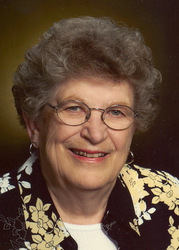