Katherine Freed Sheller was born July 14, 1923, in Hardin County, Iowa to Robert and Thuie (Smith) Freed. She attended Melrose #8 school in Grundy Co. and graduated from Whitten High School in 1942 after which she attended Marshalltown Business School. She was united in marriage to Howard Sheller on July 16, 1943 at Ivester Church of the Brethren. They lived and farmed in rural Grundy County until 1995 and moved to Grundy Center. In 2008 they celebrated their 65th Anniversary. She was an active member of the Ivester Church of the Brethren, where she served as church Treasurer for 6 years, Farm Bureau, 4-H Club, the Grundy Center Women?s Club, the "Loose Threads" Quilt Club and the Sunshine Club.

She was preceded in death by her husband, Howard, parents, a sister Betty Freed and a brother Judson Freed. 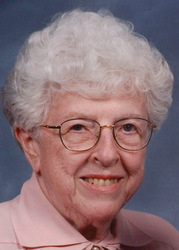