Barbara Ann Woebbeking, 76, of Gladbrook, Iowa, entered into eternal life on Tuesday, January 27, 2009 while under the care of Cedar Valley Hospice.

Barbara Ann Woebbeking was born November 5, 1932 at her home near Hoagland, Indiana. She was the daughter of Ludoph and Malinda Scheumann. Barbara attended St. John's Lutheran School in Decatur, IN and graduated from Concordia Lutheran High School in Ft. Wayne, IN.

On August 27th, 1955 she married Vernold Woebbeking. Together they were blessed with four children: Deb, Doug, Duane and Dorcas Dee. They lived near Woodburn, IN for eleven years. On February 16th 1966 they moved to Gladbrook, Iowa to begin a farming career together. Barbara worked along the side of her husband on the family farm until retirement. Barbara was a faithful and devoted member of the St. John's Lutheran Church in Reinbeck where she enjoyed sharing her faith with others. She was a member of the Dorcas Society, District LWML, Sunday School Teacher and President and Secretary of the Thrivent Chapter in Grundy County. She was a member of Gladbrook Women's Club, Gladbrook Lion's Club, Women's Auxiliary and was a 4-H Leader. One of Barbara's joys in life was supporting her children and grandchildren and having family gatherings.

Preceding her in death are her parents, brother Ronald and sisters Phyllis Ruhl and Rita Tombaugh. 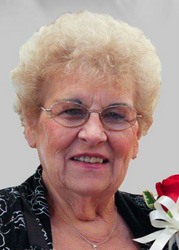