The Reverend Calvin W. Vanderwerf entered the Church Triumphant on December 10, 2008 at a Temple hospital.

Funeral Services will be held at the Bethany Presbyterian Church in Grundy Center, IA at 11 am on December 18, 2008. Vistitation will be from 9:00 A.M. until 11:00 A.M. service time at the church. Interment will be at the Rose Hill Cemetery in Grundy Center, IA.

He was born October 4, 1927 on a farm in Parkersberg, IA. Calvin graduated from Aplington High School in Iowa in 1944. He entered the University of Dubuque as a college freshman at the age of 27. He received his Bachelor of Arts in 1958, a Master of Divinity degree from the Dubuque Theological Seminary in 1960, and a Master of Sacred Theology degree there in 1974.

It was at the University of Dubuque that he met Sally Freedman, a registered nurse who became his wife in 1960. He was ordained as a minister of the Presbyterian Church (U.S.A.) and proudly supported that denomination for more than fifty years.

In 1994, he and his wife retired to Temple, TX, where he did pulpit supply at area churches and served a 18-month term as interim pastor at the Presbyterian Church of Salado. Blessed with a strong work ethic and desire to serve others, he also worked part-time at Crawford-Bowers Funeral Home, formerly Sheffield Funeral Home in Temple from 1995 until 2008. A lifelong tee-totaller and nonsmoker, he enjoyed good health and daily four-mile walks; the onset of his illness in April 2008 marked his first-ever hospitalization.

Crawford-Bowers Funeral Home in Temple is in charge of arrangements. 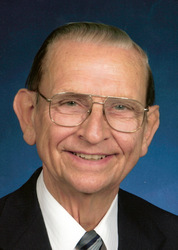