Elmer Lawrence Muller was born June 6, 1928, in rural Parkersburg, Iowa, the son of Jelske and Dena (Kalkwarf) Muller. He was baptized in to the Christian faith at Salem Lutheran Church on June, 25, 1928. He attended Pleasant Valley No. 6 rural school and graduated from Parkersburg High School in 1946. After graduation he worked on the family farm until March 1951, when he joined the U.S. Army. He served with Co. B 112 Regiment 28th Infantry Division stationed in Germany during the Korean War. He was awarded the Expert Rifleman's Badge, Good Conduct Medal and Presidential Unit Citation. He served as a sniper and later as a regimental cook. Elmer served 4 years with the army reserve, receiving an honorable discharge in April 1957.

On April 17, 1953 Elmer was united in marriage to Harriett Poppen at the Pleasant Valley Reformed Church in Holland, Iowa. They farmed south of Parkersburg for 19 years, where he served as township trustee and election judge. After that, they moved to Holland, IA. He worked for Mid Equipment until its closing and at Norwesco, Inc. until he retired in January 1991. He served on the board of directors of the Holland Community Club for many years and helped with the Holland Recreation Club. Elmer was a lifetime member of the American Legion Post 285, in Parkersburg, Iowa. He enjoyed bird watching, fishing, hunting and woodworking.

Committal services will be held at a later date. 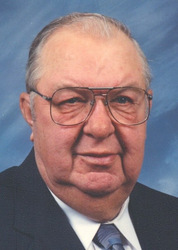