Merle E. Kramer, 80, of Steamboat Rock, Iowa died at his home from natural causes on Monday, December 08, 2008. Funeral services will be at 10:00 am on Friday, December 12, 2008 at St. Paul Lutheran Church in Eldora with Pastor David Splett officiating. Burial will follow in the Steamboat Rock Cemetery. Visitation is from 5 pm to 7 pm on Thursday at Creps-Abels Funeral Home in Eldora. Memorials may be directed to Merles family.

Merle was born May 9, 1928 in Eldora, Iowa, son of George and Josephine (Gast) Kramer. He was educated in the Steamboat Rock School System and began to farm with his father when he was just a teenager. On September 1, 1949 Merle was united in marriage to Mildred Mick Polzin at St. Paul Lutheran Church in Alden. He served with the Iowa Nation Guard for three years and continued to farm near Steamboat Rock. It was known throughout the farm community that Merle would always have some of the straightest crop rows in the area. He was a member of St. Paul Lutheran Church of Eldora.

During Merles younger years he enjoyed snowmobiling and tractor-pulling, and was proud to have won first place pulling at the Iowa State Fair in 1965. He enjoyed playing cards throughout his life and was very fond of his many boxer dogs, all of who were called Max.

He is survived by his wife, Mick; three sons, Randy and his wife Laura, Mark, and Marvin and his wife Lora all of Steamboat Rock; daughter, Robin Nicholson and her husband Doug who live in Fairbanks, Alaska; sisters, Esther Getting and husband Wallace of Grundy Center and Darlene Taylor of Eldora; brother, Gerhardt Kramer and wife Edna of Ackley; by 8 grandchildren, Jennifer (Travis) Meester, Eric Kramer, Kristine (Mark) Hoskinson, Jill Kramer, Ben Shupe, Zane Nicholson, Ryan Nicholson, and Kendall Nicholson; and by 2 great grandchildren, Autumn Meester and Addelyn Hoskinson.

He was preceded in death by his parents; daughter, Diane; brothers, Harold, Lester, and Kenneth; and sisters, Helen Luiken and Ruth Moon. 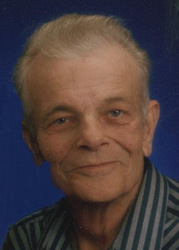