Ella was born July 21, 1921, in Comfrey, MN, the daughter of August and Gepka (VanDeest) Henze. She received her education at the Holland School in Holland, Iowa. On October 19, 1955, Ella was united in marriage to Vernon James Meints in Holland, Iowa. They started their married life farming in the Colfax area for a time before moving to the Grundy Center area. She was a member of the Colfax Center Presbyterian Church in rural Holland and was active in her church. They moved from the farm in 1986 to Grundy Center where she resided until moving to long term care. Ella loved to collect butterflies and birds. She enjoyed spending time with her family and friends.

She was preceded in death by her husband, Vernon; her parents; two brothers, George and Ernest Henze; triplet siblings, an infant brother and infant sisters, Lena and Susie. 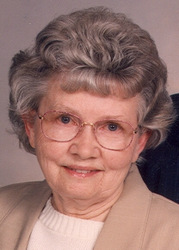