Shirley was born August 16, 1935 near Clarksville, Iowa, the daughter of Arnold and Bertha Wilken. She grew up in the area of her birth while attending country school. During her school years she excelled in basketball and participated in school plays graduating from Clarksville High School in 1954. Following high school she attended Secretarial school in Omaha, Nebraska. On March 27, 1955, she was united in marriage to Marlin Klar at the Pleasant Valley Church in rural Clarksville, Iowa. This union was blessed with two sons, Kevin and Kendall. Shirley spent her professional career employed at the Grundy County Courthouse as deputy treasurer for 43 cherished years. She retired on January 2, 1998. Idle time was never part of Shirley's nature, so she began catering with her closest friend, Vi Roberts, which she continued to enjoy up until the time of her death. Shirley was a longtime member of the American Lutheran Church in Grundy Center. She led a spiritual life of strong uncompromising faith, which served her in all aspects of her life. Shirley's life was centered around her family and her home. She spent countless hours in her kitchen cooking, canning and laughing with family and friends. She enjoyed traveling, fishing with Merk, going to the casino and playing cards. For many years, Shirley participated in weekly bowling on Monday nights. Her greatest joy came from her five grandchildren. She never hesitated to indulge each and every one of them in her own special way. Shirley was a loving wife and mom and a devoted grandma.

Shirley is survived by two sons: Kevin and Kendall both of Grundy Center, Iowa; five grandchildren: Jessica, Brenna, Matthew, Sage, and Sloan; her brother, Darrel (Doris) Wilken of Surprise, AZ; and many nieces and nephews.

Shirley was preceded in death by her husband, Marlin; two brothers, Don and Dale Wilken and her parents. Shirley's words of wisdom; "There is no promise of Tomorrow" 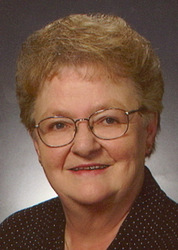