Ernest G. Larsen, 85, of Reinbeck, Iowa, died Thursday, November 27, 2008, at St. Marys Hospital in Rochester, Minnesota. Funeral services will be 11:00 A.M., Monday, December 1, 2008, at the United Methodist Church in Reinbeck, with Pastor Terry Plocher officiating. Private family burial will follow at the Reinbeck Cemetery, with full Military Rites provided by the Reinbeck American Legion Action Post #242. Visitation will be Sunday, November 30, 2008, from 2:00 P.M., to 5:00 P.M., where the family will be present to greet friends at French Hand Funeral Home in Reinbeck. Memorials may be directed to the United Methodist Church in Reinbeck or to the American Cancer Society.

Ernest Gilbert Larsen was born November 30, 1922, in rural Reinbeck, Iowa, the son of Sofus C. and Ingeborg Nicoline (Larsen) Larsen. Ernest enlisted into the United States Navy on November 25, 1940. He served his country during World War II, fighting in all of the invasions, including, the Battle of Normandy, North Africa, and Italy. Ernest was honorably discharged on December 5, 1945. On November 3, 1946, Ernest was united in marriage to Beth E. Bonacker in Reinbeck, of which they have shared sixty two years of marriage together. After their marriage they made their home in Reinbeck where Ernest began work at Bonackers IGA Grocery Store. In 1968, Ernest and Beth purchased the store from her parents and it became known as Ernies Super Valu. They owned and operated the store for seventeen years until they retired in 1985. Ernest worked in the grocery store business for sixty-one years. Throughout his years in Reinbeck, Ernest was also very active in many community organizations. He was a member of the Reinbeck United Methodist Church, and had been a member of the building committee for its current structure. Ernest also was on the board at Parkview Manor in Reinbeck, where he had been instrumental during its inception. He was a seventy year member of the Reinbeck Masonic Coin Lodge #394, a member of the Reinbeck American Legion Action Post #242, and had also been a member of the Reinbeck Fire Department, serving both as a fireman and past Chief. Ernest also loved to plant trees, planting many of the trees that stand today Reinbeck, Oak Leaf Country Club and also some in Minnesota. He also loved to collect trains, do woodworking, travel, fish, and play golf. Ernest also had his own apple orchard for many years. 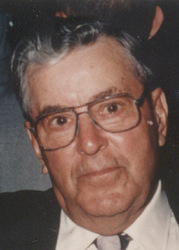