Ruth A. Smoldt, 93, of Reinbeck, Iowa, died Wednesday, September 17, 2008, at Parkview Manor Nursing Home in Reinbeck, of natural causes. Memorial services will be 11:00 A.M., Tuesday, September 23, 2008, at the United Methodist Church in Reinbeck, Iowa, with Pastor Terry Plocher officiating. There will be no visitation. Per Ruths wishes, her body has been donated to the University Of Iowa College Of Medicine for scientific research. Memorials may be directed to the Endowment Fund at the United Methodist Church in Reinbeck.

Ruth Aileen (Vittum) Smoldt was born on August 31, 1915, at home on the farm near Reinbeck, the daughter of Ernest and Susan (Shepard) Vittum. Ruth attended rural country school as a girl and then graduated from Reinbeck High School in 1932. On November 27, 1937, Ruth was united in marriage to David Gethman Smoldt. After their marriage, they moved to the home farm outside of Reinbeck. Ruth kept books for their DX Tank Wagon business, and she also helped to run their DX Gas Station in Reinbeck. They loved to travel, especially when they could by train. After their retirement, they also wintered for many years in Arizona. On July 11, 1997, Ruths husband David died, and she continued to live on the farm. In 2003, Ruth moved to Parkview Manor in Reinbeck. She was a lifelong member of the United Methodist Church in Reinbeck where she had faithfully served for many years as the church organist.

She was preceded in death by her parents; her husband David; one sister, Marian Koch; and two brothers, Paul and Robert Vittum. 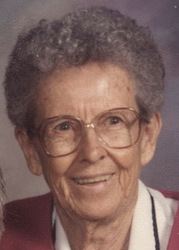