Harold Robertson, 95, of Reinbeck, Iowa, died Monday, September 15, 2008, at Parkview Manor Nursing Home in Reinbeck, of natural causes. Funeral services will be 10:30 A.M., Saturday, September 20, 2008, at First Presbyterian Church, Reinbeck, Iowa. Burial will follow at Washington Township Cemetery, rural Morrison, Iowa. Visitation will be Friday, September 19, 2008, from 5:00 P.M. to 8:00 P.M., with the family present to greet friends, at French Hand Funeral Home in Reinbeck. In lieu of flowers, memorials may be directed to Parkview Manor Nursing Home in Harolds name.

Harold was born March 25, 1913, at home on his parents farm, one-half mile south of Morrison, the son of Walter Raleigh and Tena (Bulthuis) Robertson. He graduated from Reinbeck High School in 1930. Harold was the last surviving member of his graduating class. On August 11, 1937, Harold was united in marriage to Ferne Wollesen at her parents home in Lincoln, Iowa. After their marriage, they resided in Reinbeck for four years. In 1941, they moved to their farm one mile south of Reinbeck. Harold was a livestock and grain farmer, and he raised Pioneer Seed Corn for fifty-two years. In 1998, they moved to town and made Reinbeck their home. Harold and his wife Ferne shared seventy-one years of marriage together. Harold was a member of First Presbyterian Church in Reinbeck. Time spent with his family was the most important thing to him.

He was preceded in death by his parents; one brother, Henry Robertson; and three sisters, Harriette Crowe, Dorothy Gardiner and Kathryn Richardson. 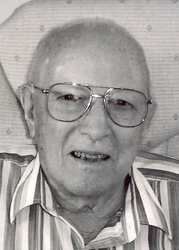