Marlys was born September 21, 1925, in Grundy Center, Iowa, the daughter of Fred T. and Orpha L. (Lynch) Smith. She graduated from Grundy Center high School in 1943.

Marlys married Dores J. Ross on April 20, 1946 in Warrenton, Virginia. The couple returned to Grundy County to begin their married life. Marlys was a devoted wife to Dores for 62 years. She found her lifes fulfillment as a homemaker and mother of four children. She spent her later years enjoying retirement with her husband in Ames, where they lived for the past 24 years.

In addition to her husband, survivors include a daughter Pamela (Dick) Miller of Dewar, Iowa; son Alan (Tricia Jones) Ross of Roseburg, Oregon; son Terrence (Rita) Ross of Bellevue, Nebraska; and son Jon Ross of Ames, Iowa; as well as many grandchildren and great grand children; and a sister: Avis Jones of Medford, Oregon.

She was preceded in death by her parents; a brother: Fred T. Smith Jr. and a sister: LaDean Ingersoll. 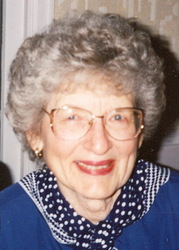