Marie was born on August 24, 1919, in Grundy County, Iowa, the daughter of Menko and Jennie (Kiewiet) Grimmius.

On November 23, 1939, she was united in marriage to Walter Carl Folkerts in Grundy Center, Iowa. They always made their home in Reinbeck, where Walt started his own Trucking business.

Marie was a homemaker and a very loving wife, mother, grandmother and great-grandmother who enjoyed cooking, sewing, reading, flowers and the Iowa Hawkeyes. She was a member of St. Johns Lutheran Church in Reinbeck.

She was preceded in death by her parents, her husband, Walt, five sisters, four brothers, one son, Dennis Dean Folkerts, and two grandsons, Courtland Mutch and Jayson Mutch. 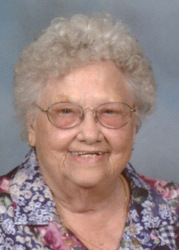