Phyllis Maxine was born on July 17, 1920, the daughter of Bryan and Mabel (Peterson) Bausman, on a farm near New Hartford, Iowa. When she was eight months old, she and her family moved to a farm northeast of Wellsburg she rapidly grew to school going age. Phyllis attended rural schools in Pleasant Valley Township in Grundy County. She completed the eighth grade at Pleasant Valley #8 rural school. Students attaining that level were required to take what was identified as eighth grade exams. Phyllis learned she was the valedictorian of a class of one hundred thirty-eight rural school eighth graders. The following fall she entered high school at Wellsburg from which she graduated with the class of 1937. Taking a twelve week course at Iowa State Teachers College, she earned a teachers certificate by taking the State of Iowa Board of Exams for Teachers. Her teaching career began in a rural school, German #3, east of Ackley where she taught for two years. She then spent five years teaching at German #6 north of Wellsburg. The need for teachers was crucial during the days of World War II. Phyllis accepted an offer to teach grades three & four in the Wellsburg School system. She spent eleven years in that schools position. During that time she was determined to further her education. By teaching during the school year and attending summer sessions at the Cedar Falls College she earned her BA Degree in 1960 an a Masters Degree in 1970. To complete forty-five years in teaching, she finished the last twenty seven years at Aplington Community School, teaching eighth grade English and serving as High School and Elementary Librarian. Phyllis was on the eight who comprised the first class to receive a Masters Degree in Library Science from the State Teachers College of Iowa, now, UNI.

On June 2, 1963, she was united in marriage to Henry J. Grobe at the Pleasant Valley United Methodist Church. She was a faithful member of church from the time she was fifteen years of age when she accepted Christ during the morning service on Easter Sunday under the leadership of Rev. J. M. Kraft. After their marriage, they purchased a home in Wellsburg. Following many years of teaching, Phyllis joined her husband in the Income Tax business, which they owned for twenty years. To enjoy their retirement, Henry and Phyllis spent twelve years in a vacation home which they purchased in Branson, Missouri. Phyllis husband Henry died in 1999, and she continued to make Wellsburg her home. Phyllis was a charter member of the Wellsburg Study Club as well as a member of the Iowa State Teachers Association for many years, and held numerous offices in various areas of the local teachers association.

She is survived by cousins.

She was preceded in death by her parents; her husband Henry; grandparents; and numerous uncles and aunts. 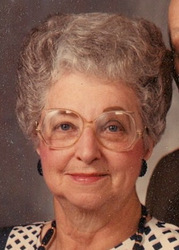