Ernest was born November 26, 1922, in Comfry, Minnesota, the son of August Christian and Gepka (VanDeest) Henze. The family moved to Holland when Ernest was 4 years old. He attended school in Holland thru the 8th grade. On November 28 1947 he was united in marriage to Verlyn Pauline Andreessen at the Colfax Center Presbyterian Church in rural Holland. Ernest worked as a framer for many years. The couple moved off the farm and into Grundy Center in 1971. Ernest worked at Mid Equipment in Grundy Center as a Supervisor of Production. He then went to work for Brockway Plumbing and Heating in Grundy Center before he retired in 1987. He was a member of the Colfax Center Presbyterian Church.

He was preceded in death by his parents; a brother George Henze and triplet siblings an infant brother, and infant sisters Lena and Susie. 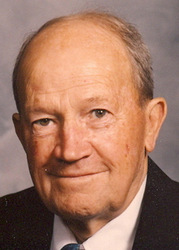