Gerald was born July 24, 1918, in New Hartford, Iowa, the son of Herman and Harriett (Watkins) Schafer. Gerald was raised in Grundy County and received his education from Grundy Center High School. He then attended Bradley Tech, in Peoria, Illinois to take a course in horology. Gerald then worked for Gruen Watch Company in Cincinnati, Ohio. On April 28, 1940, Gerald was united in marriage to Maxine Faye Bockes in Grundy Center. He entered the United States Navy in January of 1944 and returned home December of 1945. Gerald and Maxine returned to the Grundy area where he worked for Sonotone Hearing Aids, Waterloo Tent and Awning and then started Schafer Hearing Aid Center in Waterloo. They loved to travel and camp in their camper. Gerald was an avid reader, who loved to read romance books.

Gerald was preceded in death by his parents; wife, Maxine; and one brother, Marvin Schafer. 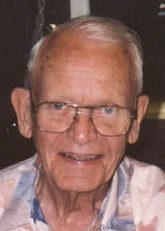