Kathryn was born October 2, 1920, in Grundy Center, Iowa, the daughter of Raymond and Leona (McCullough) Taft. Kathryn attended Grundy Center Schools and graduated with the Grundy Center High School Class of 1938. She furthered her education by attending Iowa State Teachers College in Cedar Falls. On March 12, 1942, Kathryn was united in marriage to Carl Jefferson Palmer. After their marriage they made their home in Grundy Center, where Kathryn served as the church organist at First Presbyterian Church for twenty-five years. She also taught piano lessons to many children in Grundy Center, throughout the years. Kathryns husband Carl died on June 9, 2002, and she continued to make Grundy Center her home.

She was a lifelong member of First Presbyterian Church in Grundy Center. Kathryn devoted her life to her music and her family.

She was preceded in death by her parents; her husband Carl; and one brother, James Taft. 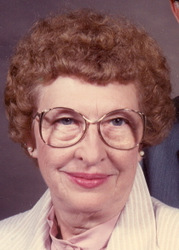