Elsie (Harrenstein) Kruger was born February 27, 1910 in Colfax Township, Iowa, the daughter of Ben and Altje Harrenstein. Elsie attended Colfax #2 School. Elsie married Klaas Kruger on December 14, 1933 at Klaas's parent's home in Colfax Township. To this union brought forth five children, Eldon, Clarice, Bernita, Karen and Jean. Elsie was a member of the Colfax Center Presbyterian Church and the Women in Church Group. Elsie loved to cook, bake cookies, watch Perry Mason and Matlock shows. There was coffee always on for friends and neighbors to stop by and visit. Most of all she loved to spend time with family and friends. 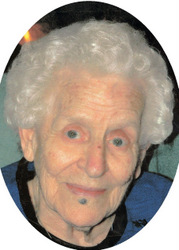