Viola was born April 20, 1918 in Parkersburg, Iowa, the daughter of Harm and Anna (Ennenga) Veenker. She attended Grundy Center Schools and graduated from Grundy Center High School. On March 26, 1941, Viola married Henry F. Meester. Viola was housewife as her children attended school; she later worked for Western Dressing for 16 years retiring in 1986. She was active member of Bethany Presbyterian Church where she taught Sunday school and was involved with the womens group. Viola loved to work with her flowers and watch birds in her backyard. She especially enjoyed spending time with her grandchildren and great-grandchildren.

She was preceded in death by her parents; husband, Henry; son, Sylvian Meester; and granddaughter, Traci Epstein. 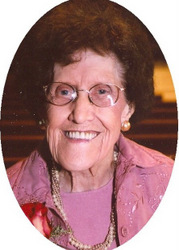