Robert E. Foster 88, of Reinbeck, Iowa, formerly of Hudson, Iowa, died Saturday, January 26, 2008, at Parkview Manor Nursing Home in Reinbeck, of natural causes. Robert was cremated and there will be no services or visitation.

Robert Emerson Foster was born April 21, 1919, in Waterloo, Iowa, the son of Emerson Edwin and Ellen (Wagner) Foster. Robert graduated from Cedar Falls High School. He was united in marriage to Marjorie Burrows and they were later divorced. He honorably served his country during World War II, serving with the United States Navy. Robert started work as a Tool and Die Apprentice for John Deere Waterloo Tractor Works, retiring as Superintendent of Mechanical Services. Robert was united in marriage to Marion Green (Penne) on August 31, 1963 in Waterloo. Robert was a member of the Hudson AMVETS. His hobbies included woodworking and gardening, growing the best apples and giving them to friends.

He was preceded in death by his parents; his first wife Marjorie; one son- Steven Foster; and two sisters- Marjorie Jessup and Virginia Larson. 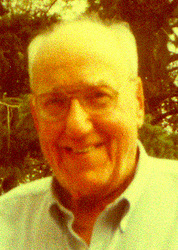