Herman was born March 1, 1924, in Grundy County, Iowa, son of George Harm and Corlena W. (Cordes) Schiller. Herman attended various country schools. Herman served his country in the Army during and following WWII. On September 29, 1948 he was united in marriage to Mildred Jene Wheeler in Grundy Center. Herman worked for area farmers before he went to work for the Farmer's Coop Co. in Dike as a Mill Operator. He did this for 38 years retiring in 1986. Herman was a member of the American Legion Post #349 in Grundy Center. He was also a member of the American Lutheran Church in Grundy Center.

He is preceded in death by his parents, an infant daughter Shirlee Ann Schiller; a daughter Dianne L. Stoakes; two sisters Ella and Frances; and two brothers George Jr. and Marvin Schiller. 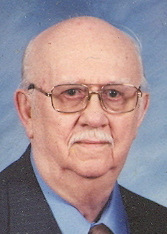