Father Neal K. Stull, 52, of Easton, Kansas, formerly of Grundy Center, Iowa, died on Sunday, September 27, 2009, at the home of his sister, Melody and Tim Hoy while under the care of Iowa River Hospice. Visitation will be held from 4 pm  8 pm on Wednesday, October 7, at Holy Family Parish, St. Gabriel Catholic Church, rural Reinbeck, Iowa with The Rosary beginning recited at 4 pm and a wake vigil service at 7 pm. Mass of Christian Burial will be at 10:00 am on Thursday, October 8, at St. Gabriel with burial to follow in Sacred Heart Catholic Cemetery in Grundy Center. There will be a memorial mass Friday, October 9, at 1 pm at St. Lawrence Parish in Easton, Kansas. Memorial contributions may be directed to the St. Lawrence parish or to the Society of our Lady of the Most Holy Trinity.

Neal was born September 24, 1957 in Grundy Center, son of Don and Loretta (Connell) Stull. He graduated from Grundy Center High School in 1977, and the University of Iowa in 1983. He attended St. Phillips Seminary in Toronto, Canada, and received his Masters of Divinity from the Holy Apostles College & Seminary in Cromwell, CT.

During the time he lived in Corpus Christi, Texas, he was an active member of the Cathedral and sang in the choir. He was also a member of the Knights of Columbus.

Neil was ordained into the priesthood June 29, 2002 at the Corpus Christi Cathedral into the order of the Society of our Lady of the Most Holy Trinity(S.O.L.T.) He served as the pastor at St. Monicas Parish in Houston, TX, and was most recently the pastor at St. Lawrence and St. Joseph of the Valley in Easton, KS.

In 2005 Neal had the opportunity to serve communion with Pope John Paul II at the Vatican during a Midnight Mass. He also had the privilege of serving communion at Yankee Stadium for Pope Benedict XVI.

During his priesthood, he was active in many youth groups as he had a passion for working with young people. He made several trips to Mexico City to help with a school, and spent time with the children at the Indian Reservation in North Dakota helping them make rosary beads. Benedict, his black lab, was given his name based on a contest Neal organized with the youth group.

Neal was an avid sports fan, being particularly fond of the Chicago Cubs, and the Iowa Hawkeyes. He regularly attended local sporting events in the communities where he served.

Preceding him in death was his father, Donald on November 2, 2001. 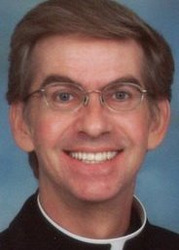