Walter C.W. Block, 82, of Wellsburg, Iowa, died Wednesday, November 22, 2006, at Marshalltown Medical and Surgical Center in Marshalltown, Iowa. Funeral services will be 10:00 A.M., Saturday, November 25, 2006, at St. John?s Lutheran Church in Wellsburg, Iowa, with Pastor Bruce Zimmermann officiating. Burial will follow at Shiloh Cemetery in Wellsburg, with full military rites provided by the Wellsburg AMVETS Post No. 91 and the American Legion Post No. 213. Visitation will be Friday, November 24, 2006, from 5:00 P.M. to 7:00 P.M., at Doyen-Abels Funeral Home in Wellsburg. A memorial fund has been established.

Walter Charles William Block was born May 1, 1924, in Dubuque, Iowa, the son of Edward G. and Amanda (Brase) Block. Walt attended grade school in Waverly, Iowa, and graduated from high school there in 1943. While in high school, Walt was active in sports. He lettered in football and baseball and was also the captain of the baseball team. After high school, Walt served in the United States Navy during World War II, from 1943 to 1946. On June 8, 1947, Walt was united in marriage to Norma D. Luther at Zion Lutheran Church in Oelwein, Iowa. Walt also was a student at Wartburg College in Waverly, where he received his Bachelor of Science Degree in 1950. While he was a student at Wartburg, Walt lettered in football. He then obtained his Master's Degree in Mathematics in 1964 from Illinois Wesleyan College in Bloomington, Illinois. Walt began his coaching career in the summer of 1950. Walt taught and coached at Auburn from 1950 to 1956, where he coached the 1953 Tigers to a Fall Baseball State Championship. In 1956, they moved to Wellsburg, where he introduced a football program to the school. Walt taught and coached at Wellsburg until he retired on May 20, 1990. During his many years at Wellsburg, Walt coached football, and track, being honored in 1977 and again in 1980 as the Track Regional Coach of the Year. On December 13, 1986, Walt was inducted into the Iowa Track and Field Hall of Fame.

Walt was a member of St. John's Lutheran Church in Wellsburg, and the Wellsburg American Legion Post No. 213. After Walt retired, he made many wooden toys.

He was preceded in death by his parents and his sister Rose. 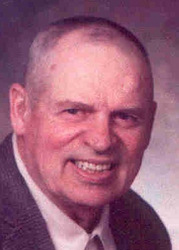