William "Wallace" Smith, the second of three sons born to Joseph Smith III and Ada Clark Smith, was born in Lamoni, Iowa, on November 18, 1890. He was Joseph Smith Jr.'s grandson.

W. Wallace, as he was known, was president of the Graceland class of 1921 and played varsity basketball and football during his years at the college and at the University of Missouri at Columbia, where he completed his bachelor's degree. After graduation, he worked at a hardware store, then became a traveling salesman based from St. Louis, Missouri, from 1931 to 1942.

In 1942, Wallace moved to Portland, Oregon, to enter the shipbuilding industry during World War II, a career he continued until being ordained to the RLDS Council of Twelve Apostles in 1947.

In 1950, Wallace was ordained to the First Presidency as a counselor to Israel A. Smith, then succeeded his half-brother as the church's fifth president and prophet on October 6, 1958. During his presidency, the church expanded into other Western and non-Western cultures, and the call was made to begin preparation of building the church's long-planned temple.

Wallace received an honorary doctorate degree from Graceland in 1970 and was the recipient of the college's Distinguished Service Award in 1971.

He left the church presidency in 1978, becoming the first leader of the RLDS Church to retire as president emeritus, and was succeeded by his son, Wallace Bunnell Anthony Smith. 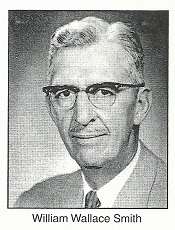