Dennis R. Steele was born on August 15, 1940, in Crookston, Minnesota. He grew up in Cheyenne, Wyoming.

Dennis emerged as one of Graceland's most varied innovtors of the late 1960's and 1970's, bringing the college an array of new programs that ranged from the technological to the musical.

Dennis attended the University of Colorado for one year, completed his B.A. in mathematics (1962) and obtianed his M.A. in philosophy (1966) from San Diego Stated College, and earned his Ph.D. in computer science from Iowa State University (1975).

Dennis joined the Graceland faculty to teach math and philosphy in 1965. Two years later, he pioneered the first computer science courses at the college, with students using punch cards that Steele programmed during his studies at ISU. He also wrote a textbook on elementary computer and compiler design.

In 1965, Dennis helped a group of students organize the New Folk Singers (later called the North Door Singers), a musical ensemble that toured the U.S. and eastern Asia until 1973.

Dennis displayed his own musical abilities to students as part of the 1970's faculty quartet called The Unpredictables, which also included Gerald Hampton, Charles Emslie and Ray Adams. His most memorable musical creation was the Graceland Ramblers, a student musical group (initially called the Riverboat Rambers) that originated as a 1978 winter term course. The group was so popular that Graceland decided to fund annual summer tours of the Rambles across the United States and Canada through 1988 as part of the college's public relations and recruiting efforts.

Dennis also helped organize the Saddle Club, a horseback riding group that contued for more than half a dozen years after its introduction in 1975-76.

When not in the classroom, Dennis is busy with his wife Molly as the owners of Bit-O-Wyo Ranch, a guest ranch with a horse barn dinner show and trail rides near Cheyenne, Wyo. The Steeles' daughter operates a childrens adventure camp there each June. Being both a college professor and a guest-ranching Wyoming cowboy doesnt seem to bother Dennis in the least.

I go from Aw, shucks and spittin to teaching circuit programming theory, he says, laughing. Im a cowboy PhD. 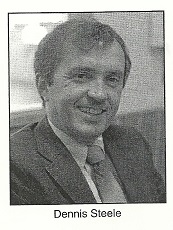