The son of William Wallace and Rosamond (Bunnell) Smith, Wallace Bunnell Smith was born on July 29, 1929, in Independence, Missouri. Before enrolling at Graceland in 1946, Wallace spent his teenage years in Portland, Oregon.
As a pre-medical student, Wallace was active as editor of the 1948 Acacia, president of the Graceland Players, andmember of the Priesthood Club, the Tri-T Club, and the Graceland Tower staff. Wallace obtained his associate's degree from Graceland in 1948, earned his bachelor's degree from the University of Kansas in 1951, and completed his doctor of medicine degree from the University of Kansas School of Medicine in 1954.

Wallace interned at Charity Hospital of Louisiana in New Orleans, then held active duty with the U.S. Naval Reserve Medical Corps from 1955 to 1958, working in aviation medicine and as a flight surgeon. He practiced ophthalmology in Independence, Missouri, from 1962 to 1976.

A priesthood member since 1945, Wallace was designated by his father in 1976 to succeed him as the church's leader, and was ordained as the sixth president and prophet of the church in April of 1978. He led the church as it opened its ministerial doors to women priesthood members, as well as the physical doors of the long-planned RLDS Temple. Wallace is credited with being one of the first church leaders to formally propose a name-change at a Joint Council retreat in 1994. During the subsequent World Conference of 1996, the name change to "Community of Christ" from "Reorganized Church of Jesus Christ of Latter Day Saints' did not receive a majority vote, but was eventually passed and approved during the April 2000 World Conference.

In 1978, he presented the first Wallace B. Smith Grant, a scholarship for prospective Graceland students that has become an annual tradition at the summer Spectacular hosted by the college. In 1983, Wallace received Graceland's Distinguished Service Award.

Wallace B. Smith ended the continuous succession of Smith family leaders of the RLDS Church when he retired as president emeritus of the the church on April 15, 1996 and designated Grant McMurray as his successor. 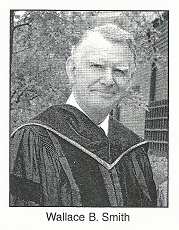