Farmersburg- Rodney Lane Meisner, 28, of Clinton, formerly of Farmersburg, died Saturday morning, April 13, 2002, in his parents' home in Farmersburg from complications of a seizure. Services: 11 a.m. Wednesday, St. John Lutheran Church, Farmersburg, by the Rev. Bruce Hanson and Pastor Karl Wolf. Burial: Farmersburg-Wagner Cemetery. Friends may call from 3 to 8 p.m. Tuesday at Leonard Funeral Home, Elkader, and after 10 a.m. Wednesday at the church.

He was born May 20, 1973, in Elkader, the son of Ivan and Jeanne Hoffman Meisner. He was baptized and confirmed at St. John Lutheran Church in Farmersburg. He graduated from MFL High School in Monona and Luther College in Decorah.

Rodney was a Spanish teacher for four years at Preston High School. He also taught English as a second language at Clinton Community College. In his spare time away from teaching, he spent several weekends officiating basketball.

He was a member of St. John Lutheran Church in Farmersburg. There, he served on the council, taught Sunday school, sang with the church choir and sang solos at numerous church events. Rodney also currently was a member of St. John's Evangelical Lutheran Church in Preston. There, he was on the church council, taught Sunday School and sang with the choir.

Rodney's first love was International tractors. He was a member of the NE Iowa Farm & Antique Association. Rodney, with his father, collected and restored over 28 antique tractors. He participated in numerous tractor pulls and local parades.

Rodney loved music, played the drums and guitar and enjoyed singing for special occasions and karaoke. He was a volunteer member of the Farmersburg Fire Department for several years.

He spent several months studying in Mexico in 1995. He revisited Mexico on three separate occasions since that time. Other vacations included trips to Washington, D.C., Gettysburg, Nashville, Atlanta and San Francisco.

He was preceded in death by a brother, Randy; his grandfather, Clarence Hoffman; and his paternal grandparents, Harold and Selma Meisner.

The photo is from his gravestone in the Farmersburg-Wagner cemetery: 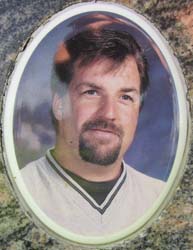