Elkader- Services have been set for the three Elkader residents killed in an auto accident near La Crosse, Wis., early Saturday.

Rites for Mr. and Mrs. William Muench will be held Tuesday at 10 at St. Joseph's church in Elkader. The bodies are at the McTaggart funeral home.

They are survived by two daughters, Shirley, who will be a junior at the University of Iowa, and Kay, who was just graduated from high school. Mr. Muench is also survived by a brother, Joseph of Elkader.

Rites for Mrs. Ehrhardt will be held Wednesday morning at St. Joseph's church. The body will be at the Witt funeral home.

Mrs. Ehrhardt is survived by her husband, who is hospitalized in La Crosse with injuries suffered in the accident; five daughters, Mrs. Gerald Funk of Dubuque; Mrs. Andrew Baumgartner of Cedar Rapids; Mrs. Duane Johanningmeier of Monona; Roxanne, 2, at home, and Dawn, 14, at home, and a son, David, 5.

She is also survived by her mother of Wadena and sister, Mrs. Rialto Kuehl, Elkader.

The two couples were bound for northern Minnesota on a fishing trip when their car collided head-on with another vehicle on highway 53. Two persons in the other car were injured and are also hospitalized in La Crosse.

(Submitter note: Relationship of Fowler, Linderwell and Eschen, if any, is unknown.)

NOTE: A picture of the wrecked vehicle that accompanied the first article gives the victims names as William M. Muench, 49; his wife, Jeanne, 44; and Mrs. Alberta Ehrhardt, 41. 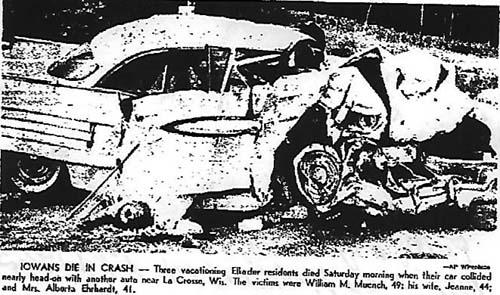