Randy Meisner was born on March 3, 1965, in Elkader, Iowa. In May of 1965 he was baptized at Peace United Church of Christ in Elkader by Rev. Richard Banzhof. Sponsors were Dorothy and Eldon Shaw. He attended Sunday School at St. John Lutheran in Farmersburg and had completed the 2nd grade at M-F-L.

He was preceded in death by a grandfather, Harold Meisner.

Added by Reid R. Johnson on 1/31/2016 - The photo from his gravestone in Farmersburg-Wagner cemetery 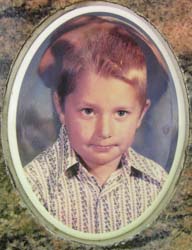