When two years of age his father and family moved to Ohio, locating in Brownhelm Township, Lorain county, where he was reared on a timbered Ohio farm, which meant much toil. He was educated in the common school and attended Norwalk Academy, Norwalk, Ohio. He taught school several winters in Ohio and engaged in farming the balance of the year. He followed the same course for a number of years after his removal to Iowa.

On November 25th, 1852 he was married to Miss Maria H. Westfall, a native of New York, at Brownhelm, Ohio. Five children were born to them, all of whom are living, vis; Byron W. Newberry, Charles W. Newberry, Mrs. Mary E. Kingsley and Kate G. Newberry, all of Strawberry Point, and Dr. Frank J. Newberry of Los Angeles, California.

In March 1855 he moved with his family from Ohio to Iowa and settled on a farm in Clayton County, four miles southeast of Strawberry Point, which he had purchased the previous autumn and which he owned at the time of his death, and where he engaged in active farm work till 1876, when he rented the farm and moved to the town of Strawberry Point where he has since resided.

In 1877 and several following years he engaged in the newspaper business at this place. He assisted in organizing and placing on an efficient working basis the successful Strawberry Point Farmers Creamery and was its secretary and manager for three years. He was always deeply interested in the advancement of agriculture and educational interests and was a thorough and successful farmer and dairyman.

He took as much interest in the farm and its management in his last days as he did when he settled here more than sixty years ago. He knew what it was to uncomplainingly meet and endure the privations and difficulties of the Iowa pioneer farmer. He was blessed with a good physique and rugged constitution and no pioneer ever exceeded him in honest toil and application. He was a great reader and a logical and forceful writer. He was a public spirited man and did all he could to advance the welfare of the community and public at large.

He served as representative from Clayton County in 1868-9 in the 12th general assembly and at the time of his death was one of five surviving members of that legislature. For several years he represented the township on the county board of supervisors and filled many other positions of trust and responsibility with credit. He was a plain, genial, kind-hearted man, one who had the courage of his convictions.

On Nov. 25th, 1902 he and Mrs. Newberry celebrated their golden wedding anniversary. His beloved wife died February 3rd, 1905, a bereavement to him that time did not lessen. He was the best of fathers, kind and considerate.

For sixty two and one half years he has resided in this community. His honest, industrious, upright life is worthy of imitation.

He has been in declining health for several months, but his vitality and activity have been remarkable for one of his years. On Saturday morning, September 22nd, at his home, surrounded by his loved ones, his spirit quietly and peacefully took its flight. A good, true man has gone from among us. 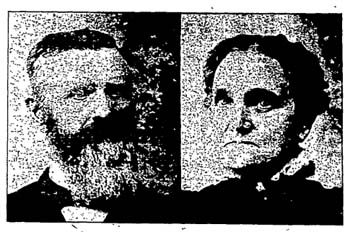