For several months the close friends of Mr. John Van Staden have been aware of the gradual decline in his physical condition. Although possessing a remarkably strong constitution strengthened by the best of care, his advancing years began to tell on his general health, and one by one the faculties gave away under the call - first his eyesight then his strength and vital forces, until at last his own strong mind admitted the situation.

Time after time in his last days he notified his friends that his end was near. After his vital forces had been exhausted he relaxed into the utmost composure and passed peacefully away.

Mr. VanStaden was of German parentage, having been born in Bedakasa, State of Hanover, Germany. At the age of 19 he came to America and found employment in New York City, where he remained until 1857, when he came west and made Guttenberg, Iowa, his home for two years, coming on to McGregor in 1859.

Upon arrival here he formed a partnership with Michael Klein, and the two conducted an extensive brewing business over a period of twenty years. Since concluding the business association mentioned above, Mr. VanStaden has led a combined life of farming and pleasure, making his home on a beautiful farm in Clayton Township, where he carried on successfully his farming operations.

Mr. VanStaden was elected on the Democratic ticket in '79-81 as a member of the state legislature to represent Clayton County, and to all accounts he filled this office creditably.

In private life he was always the same consistent and conservative thinker and exponent of the square deal for everyone, and practicing in his own dealings with men the utmost consideration.

As a business man he was successful, and his property holdings and investments have resulted in an accumulation which had made him independent as far as the requirements of his modest living methods were concerned, and from his wealth he had liberally donated and assisted friends in whom he has from time to time taken into his intimacy.

Mr. Van Staden was not a man of creed - he was a gentleman the elements so mixed in him that all the world might stand and say, here indeed was a man. And after all has been said, his regard for those to whom he was indebted stood out as prominent as any one thing in his generous nature. His attachment to Michael Klein, his associate in business in years past, was something bordering on the pathetic. It seems that in the days past when they were associated in a business way, the utmost harmony existed between them. In later years when they ceased to be partners the same loyalty to each other always prevailed, and what either of them may have wished became law to the other - it always seemed a matter of honor to prefer the wishes of the other. Sweet indeed, are such friendships and the more marked are they because they appear so infrequently.

Mr. VanStaden was a man who forgot self - his regard for others less fortunate seemed his paramount concern. It was his nature and desire to be generous, the climax of his happiness consisted in this - to put his shoulder under the other man's burden and help him lift. And if all the people whom he has befriended could tell of the assistance, their names would be legion. It is a remarkable fact that this man has given away most of his accumulations. He had the one desire do all the good he could do without positive injustice to himself - and to those who knew him best the fear was often entertained that in his benefactions his generous impulses outweighed his cold business judgment.

Of Mr. Van Staden's family connection and relationships we know but little. We understand he has a nephew, a Mr. John Kahrs, of Mederville, Iowa, father of Mrs. Lorenz Christ of this city; a niece, Mrs. Rose,, of Toronto, Canada; and three nieces and a nephew residing in the east.

Mr. Van Staden was always an earnest worker and supporter of the Masonic Order, his membership dating back to June 20th, 1870, when he joined Bezer Lodge No. 135 A.F. & A.M., continuing on to the membership of Clayton Chapter R.A.M. in Nov. 25th, 1870, and, was made a Sir Knight in Honorius Commandry on Jan. 20th, 1871, and exemplified in his own life the teachings of the order.

His attachments to the fraternity culminated in a desire for a burial of strictly a Masonic character, hence upon his death the members of the various branches of the order took charge of the remains, removing them from the Clark Hospital Saturday to the home of Mr. M. Klein, where they remained until Tuesday afternoon when they were conveyed under an escort composed of members of Bezer Lodge and uniformed Sir Knights of Honorius Commandry. The services were held at the Sullivan Opera House, and were conducted by officers of the orders, the burial taking place in Pleasant Grove Cemetery. The floral offerings of the friends and of the Masonic fraternity were numerous and beautiful.

The relatives and friends from abroad in attendance at the funeral services included a Mrs. Rose, of Toronto, Canada; Mrs. John Klein, of St. Louis; Geo. Keisel, Chas. Falkenhainer and Peter Karberg, of Dubuque.

Note: The obit has been transcribed as it was printed in the newspaper using both Van Staden and VanStaden. His death certificate (familysearch.org) gives DOB 8/6/1828, his father as John Van Staden and marital status as Single. The informant was John Klein. 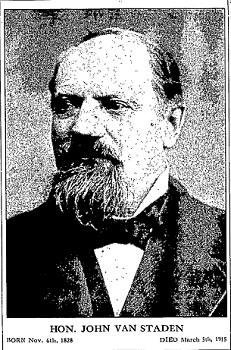