Henry Bell, of McGregor, passed away last Tuesday morning, after a long illness. Mr. Bell was well known throughout this section, having for 30 years been a traveling salesman for S. J. Peterson, of McGregor.

Transcribers Note: Find a Grave shows he is buried in Pleasant Grove Cemetery and that he was born October 8, 1841 and died July 16, 1912.

Deaths messenger gently released Mr. Henry Bell from his long illness, when he quietly passed to the great beyond Tuesday morning shortly after one o'clock at the age of seventy one years.

Mr. Bell was one of our well known citizens, having taken up his residence in McGregor thirty six years ago. He was a quite genial man who numbered many as his friends and who through the past year has borne his sufferings with much fortitude.

Deceased was born in York, England on October 8, 1841 and in 1861 was married in England to the wife who with the children deeply mourn his loss. They came to America in 1870 locating in Milwaukee and later going to Boscobel, they took up their residence in McGregor in 1876.

He was in the employ of S.J. Peterson for thirty years, surviving fifteen years as bookkeeper in the drug store and the same number as traveling salesman. For several years past he has manufactured the Bell's Lotions doing a considerable business.

He had been in poor health for about three years and one year ago underwent an operation in hopes of obtaining relief. He was a loyal member of the Modern Woodmen lodge of this city and also of the Woodman of the World.

The funeral will be held Friday morning at ten o'clock from the family home, Rev. S.T. Kidder of the Congregational church officiating.

~McGregor News, Wednesday, July 17, 1912 (included the photo, although it reproduced poorly on the microfilmed image)

Notes:
- Wife was Agnes Brown (for more, see her obituary, posted on this Obit Board) 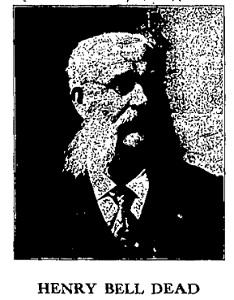